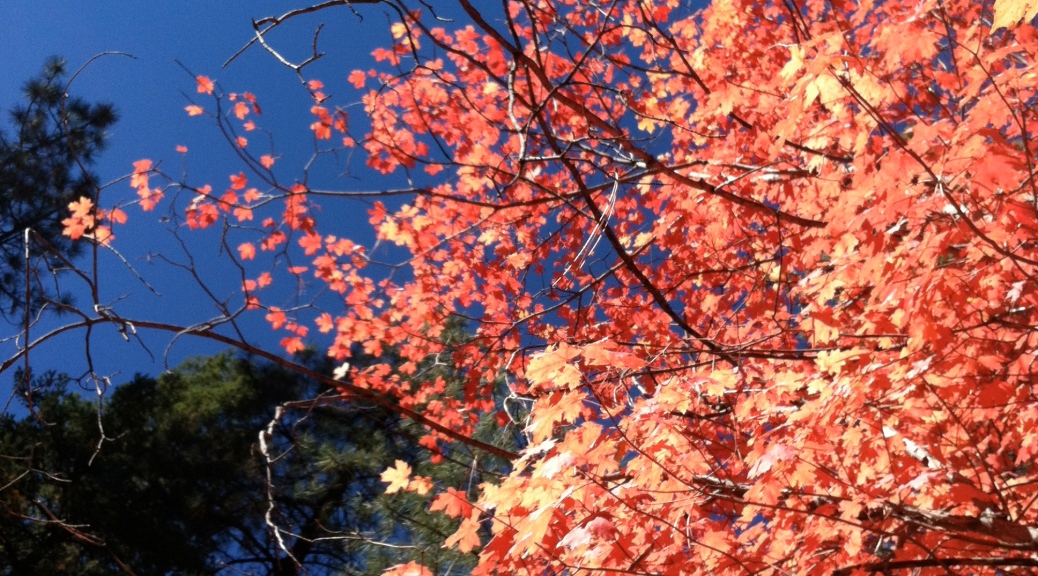 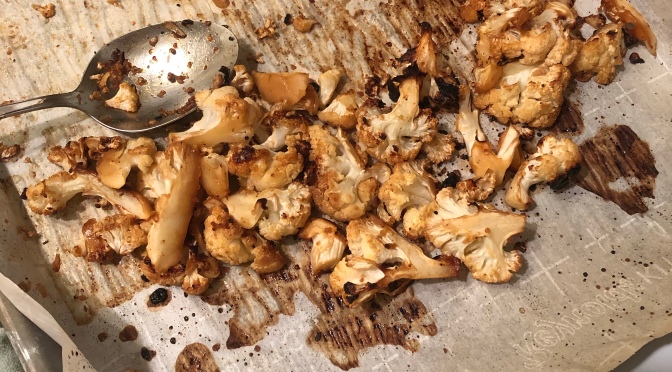 Most vegetables taste better when roasted, if you ask me. Brussels sprouts especially benefit from time in a 400-degree oven.

And any technique that makes it easier to consume more veggies is A-OK with me.

The result was worth the (fairly minimal) work involved.

My Midwestern — read “wimpy” — taste buds could probably do with a little less spice, so when I make this recipe again, I’ll cut the sriracha to 1 teaspoon instead of 2. (I used 1 1/2 tsp and that was a tad on the “too hot” side for me.

Still, it was delicious — and a good-sized serving is just 3 #mywwblueplan Points.

Do yourself a favor and check it out.

Or, if you’re up for a different kind of adventure, try roasted radishes. They too are surprisingly tasty.

I do not like the struggle bus, yet I find myself on an extended ride.

My weight continues to bounce around the 250s, as it has since March.

Our sweet neighbor brought us brownies AND cake over the long holiday weekend, and I’ve been partaking of both. Too much of both. (She bakes desserts for local restaurants … and they’re GOOD. You can taste the real butter and sugar in those brownies.)

I didn’t hit my monthly step goal for August, instead falling 5,389 steps short. My September goal is off to a rocky start as well, because I had an extremely lazy Labor Day weekend. On Sunday, I didn’t even break 2,000 steps.

On the plus side, I managed 8,042 steps on Monday, courtesy of a trip to the grocery store and a long after-dinner walk… so I can turn that around.

One of my WW leaders, Brent, gave me some advice last week when I shared my struggles: Decide how bad you want it. (One plus of the pandemic is that I can go to Zoom webinars several times a week, and I now have more than one great coach to turn to for advice.)

I think Brent may have pinpointed the problem. In addition to being in the middle of a problematic pandemic, I’ve gotten (more than) a little complacent.

I mean, I’m down more than 50 pounds. I sometimes catch a glimpse of myself in a reflective surface and am pleasantly surprised at what I see.

Some days—okay, MOST days—I want the brownie, or an after-dinner run to Dunkin’ with my boyfriend, more than I want to see success on the scale.

That’s not entirely true. I DO want to see the scale move downward. I still have 75-ish pounds to lose before I hit my goal. And I want to hit my goal and make lifetime so I can stop paying WW money. With my COVID-induced hours cut, money is scarce and getting moreso.

That means it’s time for an attitude adjustment. I already said I’d be honestly tracking in September (and then promptly tracked nothing last Friday-Sunday).

I’m back on the honest tracking wagon as of Monday, and we planned out our dinners for the week.

Perhaps this plan will help me exit the struggle bus. I may also go back to #mywwgreenplan … I’ve done all three, and recently switched back to blue because I resent counting eggs on green (and I HATE egg substitute). I’ve been toying with the idea of going back to green though, because it might help me break into the 240s. 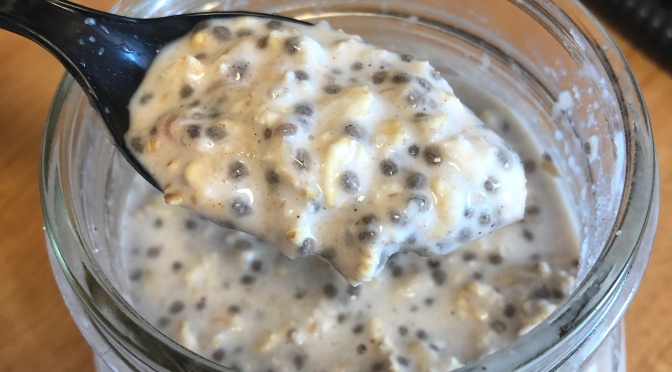 Are you on the Overnight Oats train? I am! I love cold oats more than their warmed-up counterparts.

That shouldn’t surprise me, since I also prefer to drink iced coffee year-round–unless I have a hankering for a hot latte.

Most recently, I’ve been enjoying my version of Apple Pie Overnight Oats.

It starts with rolled oats, of course, along with almond milk and 2 teaspoons of chia seeds.

But the star of my breakfast is homemade cinnamon applesauce.

I had some aging honeycrisp apples in the fruit bowl, and rather than toss them in the trash, I opted to peel, core and roughly chop them.

They went into to crockpot with 2 teaspoons of water and about a cup of water. After they cooked all day — making the apartment smell fantastic– I mashed the apples with my potato masher.

Why not? The masher doesn’t see much action otherwise.

Voila…homemade applesauce. It’s delicious — and the perfect addition to my overnight oats.

Never looks like much, but take my word for it. Yum!

Scale-wise, things are still bouncing around. Lost 3.1 two Saturdays ago, then regained most of it last Saturday.

I weighed myself this morning and have managed to take some of it back off. Hopefully by this Saturday, I’ll be able to enter the 240s.

I’ve decided September is going to be my month of tracking. I want to track my eats–honestly, rather than tracking breakfast and lunch and then not finishing dinner & snacks.